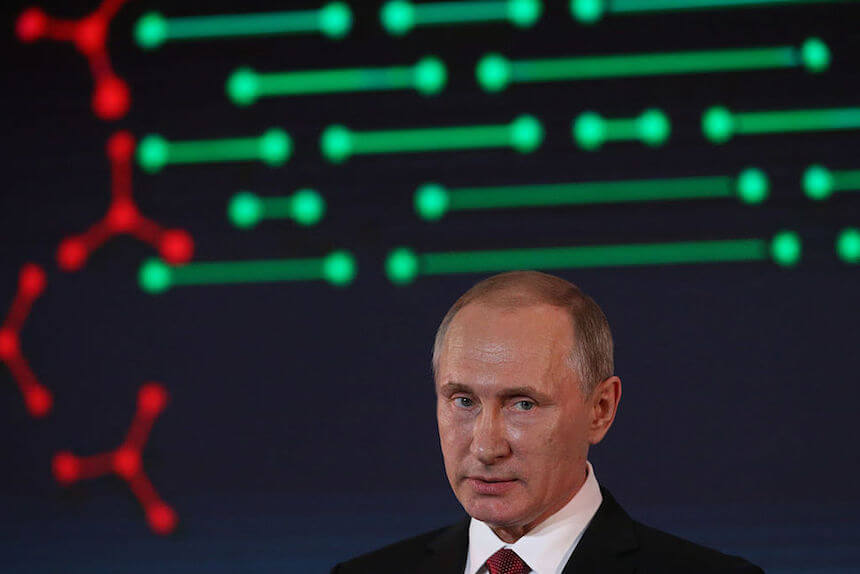 Russia was successful in its disinformation and hacking campaign to help Donald Trump win the November 2016 U.S. presidential election, but the Alliance for Securing Democracy notes that the Russian subversion of the U.S. electoral process was only one of many such attempts, and that it offers an example for gthe challenges global democracy faces.

Russia has interfered in the affairs of at least twenty-seven European and North American countries since 2004, using cyberattacks and disinformation campaigns to subvert and undermine the democratic political systems of these countries.

Laura Rosenberger, Jamie Fly, and Filip Vojvodic-Medic write in a blog post on the Aliiance’s website that the 2016 U.S. general election marked the first time in history that the Central Intelligence Agency, the National Security Agency, the Federal Bureau of Investigation, and the Office of the Director of National Intelligence expressed “high confidence” that Russia had interfered in a U.S. election on the orders of President Vladimir V. Putin. In their blog post, the three founding partners of the Alliance for Securing Democracy, provide an executive summary of Russia’s disinformation campaign and share strategies to counteract Putin’s threats to democracy in the future.

Followers of the alt-right dismiss the importance of Russian meddling, and say that Russia’s actions are similar to efforts by the U.S. government to promote American interests abroad.

Clint Watts, a former FBI agent and counterterrorism specialist who has focused on the Russian use of the Internet to spread propaganda and disinformation, said the idea that the U.S. engages in such activities is preposterous.

“When did we hack 4,000 people of a foreign country and dump all their information on the Internet?” Watts said in an interview with USA Today, referring to multiple intrusions of U.S. government and military computers that have been attributed to Kremlin-directed hackers.

The goal of Russia’s efforts in the United States and Europe “is to make the institution of democracy look not credible,” said Watts, who is now a fellow at the Foreign Policy Research Institute. “Either the institutions are corrupt, or you can’t trust the vote.”

Dov Levin, a researcher at Carnegie Mellon University who studied outside interferences in elections, told USA Today that the most common Soviet and Russian tactics are “dirty tricks — attempts to harm in some way the side they don’t want to win.”

This was precisely what the representatives of Vladimir Putin told Donald Trump Jr. about the reason for putting together the June 2016 meeting at Trump Tower between the Russian agents and Trump Jr., Paul Manafort, and Jared Kushner– that they would offer “dirt” on Hillary Clinton as a way to help Trump win the election.

Michael Flynn Jr. lost his security clearance – and his future position under his father at the NSC – when he re-tweeted to his Twitter followers the fake Russian story about Hillary Clinton running a pedophile network out of a Washington, D.C. pizzeria.

Ben Nimmo, an analyst at the Atlantic Council’s DFR Labs, which tracks Russian propaganda, told USA Today that Russian tactics mirror those used by the Soviet Union against its own people.

The Soviets used “massacres, the gulag prison system and the KGBintelligence service to intimidate and eliminate potential opponents inside the Soviet Union and outside its borders,” he said. “That is the system Putin came out of.”

A new book by Russian journalists Andrei Soldatov and Irina Borogan, argue that Putin’s decision to ensure Trumps victory in November 2016 stemmed from his anger at Hillary Clinton campaign to promote democracy in Russia and the former Soviet republics. In 2011, Putin charged that then-Secretary of State Clinton was behind large protests against his election, calling it an attack on Russian sovereignty. He also bitterly criticized U.S.democracy promotion campaigns abroad, and blamed Clinton for helping spark pro-Western political revolutions in the former Soviet republics of Georgia, Ukraine, and Kyrgyzstan.

Putin became even more angry at the United States, which he blamed for the release of the Panama Papers in early 2016 – papers which document the secret financial transactions conducted by many in Putin’s inner circle.

Soldatov and Borogan say that these reasons were behind Putin’s orders to the GRU to launch a campaign to weaken Clinton, ensure Trump’s victory, and, more generally, undermine and discredit American democracy.

Their conclusions dovetail with the findings of the U.S.intelligence community.

U.S. intelligence and law-enforcement sources have expressed their dismay at the fact that President Trump has so far refused to be persuaded by the incontrovertible – and mounting – evidence of Russian interference in the 2016 elections. The fourteen U.S.intelligence services have now assembled a complete picture – and timeline – of Russia’s campaign to ensure Trump’s election, but Trump keeps citing Putin’s denial of the Russian cyber effort as a reason why he – Trump — does not trust the unanimous conclusions of the U.S. intelligence community.